The World Cup is Prime Time to Buy a New TV

The 2014 World Cup reached 3.2 billion viewers worldwide, with over 1 billion watching the final between Argentina and Germany. In the UK, 12 million watch it on the BBC, and just under 3 million on ITV. So, Midwich Business Manager, Mark Flesher, and Consumer TV Product Manager, Matt Skilton, explained why now is the perfect time to buy a new TV and experience the beautiful game.

The time difference in Rio is three hours, just as it is in Moscow, but Russia is three hours ahead of the UK, perfect for daytime and early evening viewing with matches scheduled from 11am to 8pm. England’s first match versus Tunisia is scheduled for a primetime 19:00 on Monday June 18 – perfect for relaxing at home after work on the sofa with a cold beverage.

“The run up to a World Cup is a time when a lot of people are thinking about investing in new technology and not coincidentally when brands are talking about consumer TV, promoting it and raising awareness,” says Mark Flesher, Business Manager, Consumer at Midwich. “It offers a category focus for brands and resellers where we’ll see a variety of incentives and competitions at retail, such a ‘earn extra points for goals scored’ or ‘save money the longer England stay in.”

Worth nothing that Hisense (stocked by Midwich) official FIFA World Cup 2018 sponsors and therefore likely to feature heavily in tournament advertising.

Matt Skilton, Midwich’s Consumer TV Product Manage, adds, “The World Cup is the type of global event that forms the topic of conversation and will prompt those people who were thinking of upgrading to do so between now and June rather than leave it until later in the year.”

When they do, they will find a huge advance in technology, not least being the amount of screen, their money can buy.

“The average size four years ago was approximately 43-in and now it’s 55-in to 65-in, so the experience is getting bigger in the front room,” says Skilton. “At the same time, you might have paid £600 for a 43-in HD screen in 2014, you can buy a better quality 4K larger screen for the same budget today.”

Indeed, consumers will be hard pressed to find a TV that is not capable of 4K.

Strategy Analytics estimate that 176 million UHD TVs were in use worldwide by the end of 2017 with household penetration in Western Europe of 14%. Another research firm, Futuresource Consulting, expect 4K UHD TV’s to be in nearly a third of households by 2021. All indications are that market has moved beyond the phase of early adoption and entered a strong growth phase, propelled by increasing availability of 4K content and the imminent World Cup.

Despite running trial broadcasts of three World Cup matches in 4K in 2014, the BBC has not indicated if it will transmit any coverage from Russia in the format. Nor has fellow rights holder ITV. However, there is already a wealth of 4K content for consumers to view today, while they can be assured that 4K is the future of broadcasting.

Both Sky and BT, for example, produce all their live English Premier Matches in 4K along with numerous other sports including Formula 1, in case of Sky, and Premiership Rugby and UEFA Champions League for BT Sport subscribers.

The majority of Netflix and Amazon Prime drama’s are also available in the higher 4K resolution (Netflix had 800 hours of UHD content by end of 2017) and even the BBC has begun to stream some content in the format on BBC iPlayer, most recently Blue Planet II, as a prelude to launching a 4K channel.

Blu-ray dics can be bought with 4k versions of a growing catalogue of movies and shipments of UHD streaming devices (such as Now TV, Roku, Apple TV)a are rising too. At the end of 2017 they comprised about 36% of all units sold worldwide (according to Futuresource).

“Picture quality is still the main criteria consumer’s base their purchase decision on,” says Skilton. “Even a HD broadcast of content produced in 4K will look better on a 4K screen. But over and above the greater number of pixels, it is the higher contrast ratio in the picture which creates the wow factor.”

This can come from superior screen technologies such as OLED, used by Sony and LF (or in Samsung’s case QLED), in which each diode has its own light source. Greater contrast between the light and darks areas of a picture are also being introduced via technology known as Higher Dynamic Range (HDR).

Now an industry standard, HDR is being produced at source during the World Cup for every one of the 64 matches and all latest generation TVs will be able to play it back. Again, the caveat is that neither the BBC nor ITV has yet announced they will be taking the HDR signal but since the BBC had a major hand in devising the standard you can be sure it won’t be long before it is doing so, and for its regular channels rather than one-off events.

Customer satisfaction must be high on the agenda of resellers and sometimes that means encouraging prospects to purchase the most appropriate product, rather than the one they think they want.

It’s highly likely, for example, that the prospective buyer will be looking to upgrade the size of their screen. “What seems like a great idea in the store, may not fit so perfectly in the front room,” warns Flesher. “A 65-in screen on some living room walls can look far too big when a 55-in screen would be perfect for the space. A lot of people still want a TV in the corner of their room and while over time that will probably change, once you get over a certain size, this positioning can become a problem.

“There’s an issue of mounting too. While screens of 55-in and 65-in will be fine on their own stands and standard TV cabinets, larger models of 75-in are surprisingly heavy. Consumers will need advice on the best mounting options for the structure of their wall should they wish to hang it and that’s just the type of expertise that Midwich excels at.”

Then there’s audio which brand manufacturers will agree constitutes at least half the experience. “For a major sporting occasion like the World Cup you want the sound of the crowd and the commentary to be as atmospheric as possible, so you can feel truly immersed says Flesher.

Problem is, audio is often an after-thought. Resellers are advised to bring it to the front of the buyer’s mind. “A lot of people buy a new TV and expect the sound to be as good a quality as the picture but since display width and frame (bezels) have got thinner the quality of speaker technology has simply not kept pace,” says Skilton. “This can be fixed with a decent sound bar or ‘sound’ advice on arrangement of speakers in a room to enjoy the full impact of Dolby surround sound.”

Next generation audio may seem to get the least priority and attention, but this will rapidly change during 2018. BT Sport and Sky have already adopted Dolby Atmos and are just waiting for the right time to accompany live broadcasts to the market.

Dolby Atmos provides other advantages too such as the ability for broadcasters to personalize purely for the home team and providing specific audio for the hearing impaired.

For households, where sound and picture fidelity is a priority, Midwich sister company Invision could hold the solution. It will advise on complete home AV systems, including the soundproofing of rooms, design the network, specify the equipment and take care of install.

The downside of all these developments will be the inevitable confusion and incompatibilities, particularly around the various badges at retail around UHD/4K, HDR or HDR+, HDR10+ and sound advances like Atmos.

For example, Futuresource reports consumer understanding of HDR has “barely grown” over the last two years and remains at just 20% in Europe.

“Most people understand that 4K or 4K UHD is an uplift in picture quality over HD but it can be a struggle to get this message across amidst al the ‘noise’ at retail around different logos and names for UHD, the difference between 4K and HD 1080p and the various flavours of HDR,” says Flesher.

Fortunately, Midwich has had the foresight to produce a variety of print brochures and e-shots, which clearly explain the differences in the new technology. These can be tailored too for each reseller with bespoke branding to be handed to the consumer as part of a campaign to educate the market.

This article is taken from our recent World Cup InAVate feature. Click the image below to view the whole supplement: 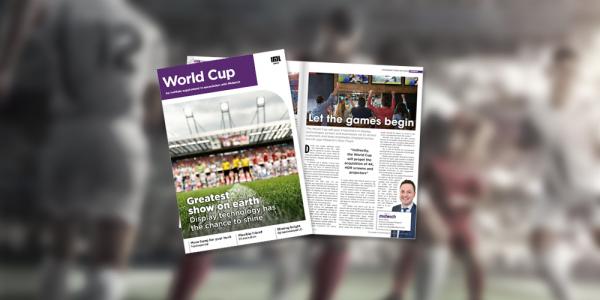