The consumer market is an ever changing landscape. This year will be no exception, so we've compiled a quick overview of new products that have already been leaked! For more detail on up-and-coming technologies, and some hints and tips on how to choose the perfect TV, check out our 2019 Consumer TV Buying Guide.

LG have certainly been turning heads at recent industry events with their new rollable OLED screens. Having already receiving an Innovation Award from CES in January (among various other accolades), there’s no doubt that LG are looking to the future of Consumer TV with this product, combining sleek versatility with state-of-the-art visual technology.

These two new 4K HDR OLED TVs are most budget-conscious than the somewhat extravagant Signature OLED, but no less impressive. Their headlining new feature is a new HDMI 2.1 input, allowing the screens to support High Frame Rate (4K graphics at 120 frames per second) as well as HDMI eARC for lossless audio output and pass-through.

LG also recently announced the release of their LG B9 for later this year, which boasts an Alpha 7 processor and an improved anti-reflective filter for Consumer TVs.

Another Innovation Award-winning product from LG arrived in the form of their second generation CineBeam Laser projector. This 4K ultra short throw model is set to take the consumer market by storm with its compact design – it can be easily moved and adjusted and produces a crisp 90” image when sat just 2 inches from the wall (increased to 120” if you can spare 7 inches), and also makes use of AI voice command technology for the ultimate user experience.

Gamers and professionals alike benefit from LG’s new small format displays (if you could call them that!) Here’s a quick overview of the specs for each of these specialised screens: 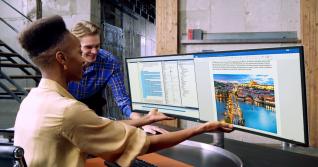 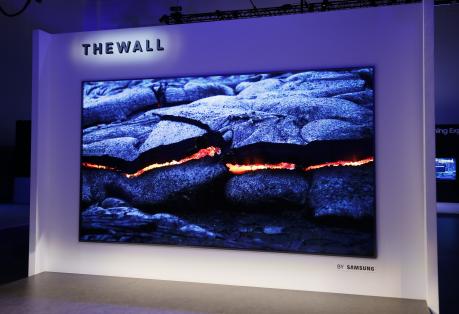 Remember ‘The Wall’ from last year? Samsung are back at it again with two brand new large screen TVs which use modular MicroLED technology to, according to Jonghee Han, President of Visual Display Business at Samsung Electronics, create “intelligent, customizable displays that excel in every performance category”. The new models are available in 75” (dubbed ‘the Window’) and a huge 219” version of ‘The Wall’, eclipsing last year’s 146” model.

MicroLED is made up of multiple microscopic, self-illuminating LEDs that can turn on and off as required to achieve perfect blacks, bright whites and high overall contrast. Unlike OLED, they are inorganic, which means they can achieve higher brightness levels, are marginally thinner, and are also cheaper to produce. 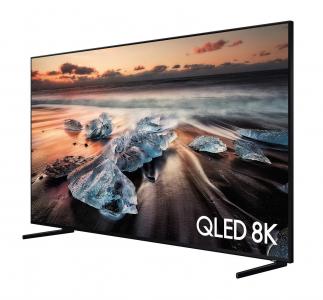 The moment is here – 8K TV has reached the consumer market. Although currently in very limited stock, and way out of the average buyer’s price range at an eye-watering £15,000 for last year’s 85” model, it’s undeniable that these TVs are stunning. Also available in 65”, 75”, 82” and 98” sizes, the 8K Quantum Processor chip does an excellent job at upscaling any content to “near pristine” 8K, and improved AI functionality for user convenience.

Samsung also announced that all their 2019 TVs will include the Apple iTunes app, a major collaborative step for both tech giants.

Not to be outdone, Sony also have an 8K offering in the form of their Master Series 85” and 98” LCD TVs. According to Sony, the X1 Ultimate processor “has a unique algorithm specially developed for 8K that can intelligently detect and analyze (sic) each object in the picture, resulting in exceptional detail and contrast for a more realistic picture that represents the creators’ intent.” As well as high contrast images and 8K upscaling, the Z9G screens include four speakers to achieve surround sound in a similar capacity to their OLED models.

Sony have been upping their game in other areas too. Although no new headphones have been released so far in 2019, they recently announced that Alexa will soon be supported (alongside Google, their existing assistant) across their WH-1000XM3, WH-1000XM2 and WI-1000X models. The app and firmware updates are expected to hit before the end of March, so watch this space!

For more information on any of our consumer TV brands, please speak to our specialist Sam Baldry on 01379 649277 or email sam.baldry@midwich.com.