Bezels are becoming smaller as screens are becoming thinner; TVs are rolling up into a box or camouflaging to match their environment – all this points to an urge to ditch the antiquated idea of the big black box on the wall and replace it with something much slicker and smoother. Something that integrates with our home, ‘disappearing’ when we don’t need it but always available as a central hub for other household appliances and technologies.

The future of TV is an exciting prospect, but it’s sometimes difficult to cut through the jargon and figure out exactly what’s available to choose from. In this blog, we discuss the latest technologies, plus some basic viewing distance guidelines and an overview of the difference between OLED, QLED and ULED, so you can pick out the perfect TV for your living space.

Let's start with the buzzwords...

High Dynamic Range (HDR) has been around for a couple of years now, but it’s an essential feature you’d want to look for in any 4K TV. In layman’s terms, it’s a technology which enables you to see both the shadows and the highlights of an image in more detail, closer to how you would in real life. Here’s an example of how colour, brightness and contrast are enhanced to achieve this effect: 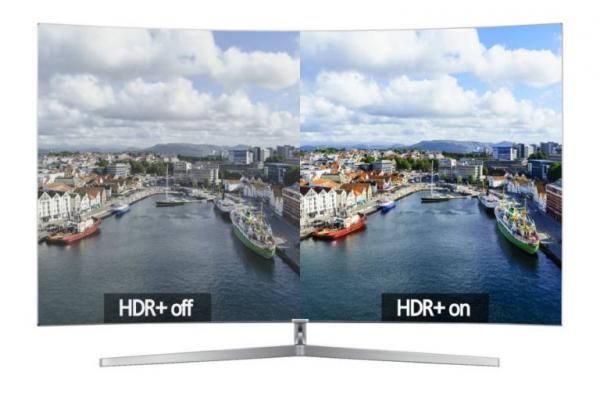 Much like the OLED/QLED/ULED debate (we’ll discuss that a bit later), various companies have created their own variations of the technology. There are currently five types: HDR10, HDR10+, HLG, Dolby Vision, and Advanced HDR by Technicolor, but HDR10 is looking to be the standard for most 4K TVs.

In the coming months and years, as brands strive to accurately recreate true-to-life image quality within the home television market, we are likely to see a steep shift in the availability of HDR content, so watch this space!

Our definition of what makes a TV ‘smart’ is constantly evolving as manufacturers incorporate more platforms, more features, and more external devices into the mix. At its root, a smart TV is one that utilises the internet (specifically ‘Web 2.0’ aka the ‘Social Web’) to function more like a computer, offering not only standard television services but also streaming platforms such as Netflix, Amazon Prime and YouTube, as well as social media platforms such as Facebook or Twitter. Some smart TVs also include an inbuilt web browser or gaming platform, and most feature an online store where users can download a variety of applications.

So, what next? A growing number of models are now compatible with speakers and voice assistants such as Amazon Alexa or Google Home (with some manufacturers even shipping with voice control remotes). We’re now entering into territory where smart TVs are beginning to further develop our concept of the Internet of Things (aka the ‘IoT’ – internet-connected devices that ‘talk’ to each other) in the context of a ‘smart home’, becoming what is essentially a central hub for home appliances such as fridges, lighting, heating and security cameras.

Here are a couple of examples of how different companies are approaching smart TVs.

LG use an interface called webOS to offer smart TV capabilities to their users. Originally created for smartphones, it has been adapted for TVs to integrate a range of popular streaming services, social media apps, web browsers and more. One notable feature is the ability to have multiple apps open at the same time, meaning users can easily switch from the TV to social media, or to look something up online, before switching straight back when done.

The most exciting benefit of LG smart TVs, however, is the LG Magic Remote. Not only can you navigate using the D-pad or by aiming your remote (like a Nintendo Wii controller), the platform also supports voice assistant control and programmable gesture control for commands such as changing the volume or channel.

LG also use webOS as the operating system for a range of other IoT devices, such as their smartwatch models and the recently released smart refrigerator.

Samsung uses the same operating system for their TVs as they do for their digital signage displays, allowing for a sophisticated, comprehensive experience. Like LG, the navigation bar sits unobtrusively at the bottom of the screen, where users can scroll through and preview the apps or even pin particular apps or sources to the bar. Samsung smart TVs also have a built-in media player that automatically engages when a USB is connected for easy access.

The minimalist control features a classic D-pad and voice control, but if you want something more motion-based, you can download the Samsung Smart View to control the cursor via your phone. The app also allows for direct media transfer for viewing photos or videos.

The majority of Samsung's smart TVs are also compatible with their SmartThings network, a way to connect your TV to various other home devices as well as using the SmartThings app as a basic controller.

Cello's smart TVs are now powered by an all new Android operating system. It offers the standard mix of terrestrial content, video streaming, catch up TV, gaming and music, plus the ability to download 1000s of apps from the Google Store. A range of apps including IMDb, iPlayer and YouTube are integrated into the intuitive programme guide, Cello Play, which allows you to navigate forwards and backwards up to one week, selecting programmes to record or catching up on things you've missed.

Cello have also recently released a new range of superfast smart TVs, with a highly responsive and easy to navigate user interface that takes you from offline to online content in just ten seconds!

Half our vendors now have an OLED offering, which is an indication of just how far the technology has come in terms of affordability since being introduced to the market around ten years ago. OLED TVs ensure perfect colour with over 8 million self-lighting pixels, which can control their own luminance individually to bring out the richness in colours across the spectrum and uncover previously hidden detail in the image.

As seen at CES, LG are steaming ahead with their rollable TV that’s being released towards the end of 2019, and have also begun ‘rolling out’ super-thin, flexible wallpaper OLED screens for both the consumer and retail markets. This flexible technology is likely to kick up a storm in R&D labs across the industry, so look out for more products soon.

It's not all about OLED though. These days every brand has their own headline-grabbing new technology to pique customers’ interest. Much like OLED, QLED and ULED allow for brighter colours and better contrast - each coming at their own price point - the main difference being that they use inorganic LEDs instead. Preferred technology is subjective and influenced by the environment in which the TV will be installed, so we would encourage you to experience the technologies for yourself before buying.

Here's a handy infographic for a reference of who is offering each different technology. Note that Hisense have also branched into OLED, in addition to their standard ULED displays (first models expected to hit in May-June this year): 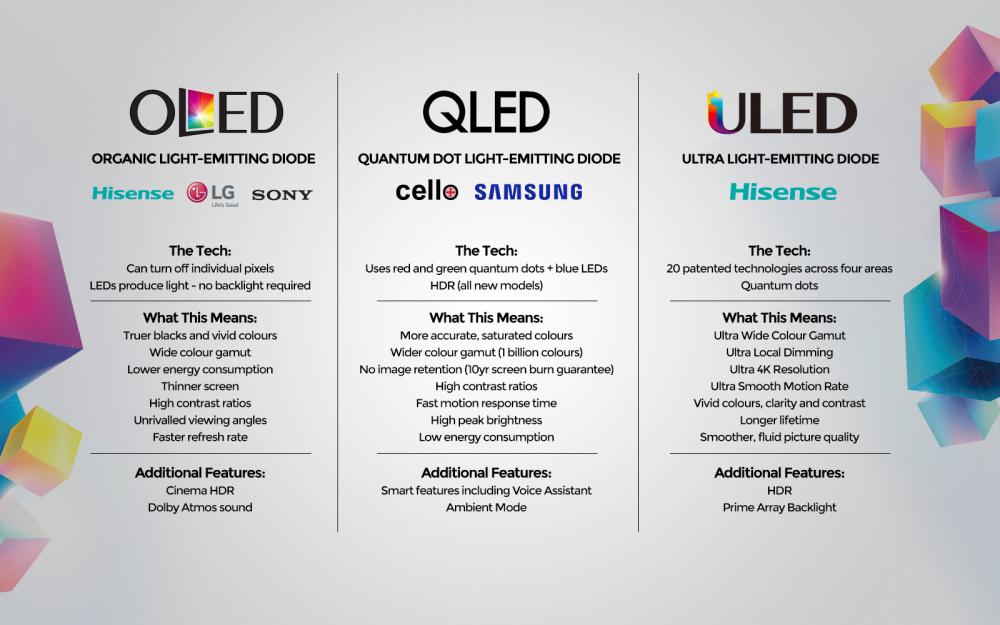 If you're looking for a OLED TV that's sure to be a talking point, the Sony A1 OLED is a great benchmark for quality:

We’ve seen a significant rise in demand for screens sized 55” and up leading into 2019, which seems to reflect the general shift in the consumer market towards bigger screens that can show off higher resolutions from a shorter viewing distance. Dixons Carphone, for example, saw a 70% surge in the sale of screens over 65in over Christmas, and a tripling of sales of screens sized 75in or more.

It would be untrue to say that bigger is always better. Generally speaking however, the bigger the screen, the further away you can sit from it while still getting what you paid for in terms of quality. 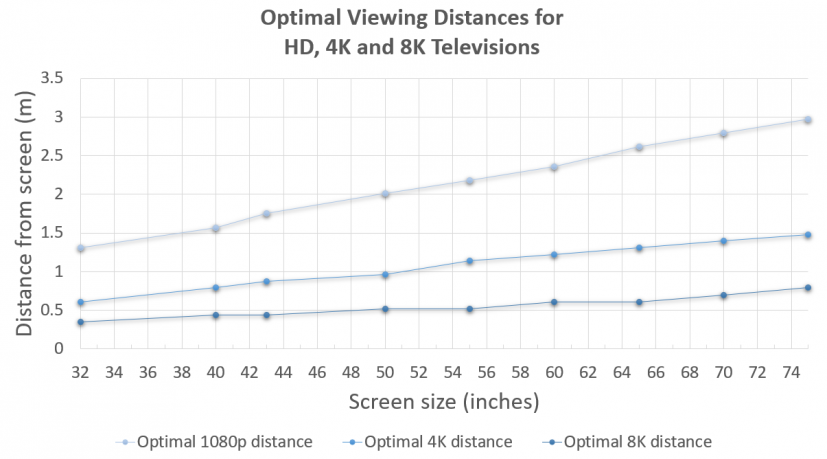 We’ve plotted some of the most popular TV sizes on a graph, based on data by Stari.co. As seen above, the optimal viewing distance to watch 4K on a 55” screen is around 1.1m. Of course, you can watch from much further distances than this (up to about 2.3m comfortably), but you won’t notice the difference in quality as much. If you’ve got a bigger space to work with, it’s generally advised to plump for a bigger screen to really get the most out of the pixel count.

4K TVs are a significant step up from Full HD/1080p in terms of required viewing distance – four times the number of pixels means viewers can sit at much closer distances without the image breaking up into individual rows of LEDs. With more and more 4K content becoming readily available, there’s never been a better time to make the move to a future-proof TV. It’s nearly impossible to find anything less than a HD ready screen, and as such, 4K has quickly become the new standard resolution for buyers.

Sharp have a great offering for a competitively-priced 60" screen (and as it's 4K, you're only looking at a 1.5m required distance between the TV and your sofa):

While the world is still getting used to the jump from HD to 4K, some brands like Samsung and Sharp are already doubling down with the introduction of 8K TVs. More pixels, higher frame rates, HDR as standard and surround sound in most models seek to replicate human experience as closely as possible. However, with very limited 8K content currently available, and a hefty price tag, it’s probably best to let this one simmer for a bit.

Samsung among other manufacturers, have also been working on developing LED for home use. Following last year's the launch of ‘The Wall’, a huge 146” MicroLED-based TV, they were back at CES 2019 with a 77” version (dubbed ‘The Window’) as well as a gigantic 219” ‘Wall’. 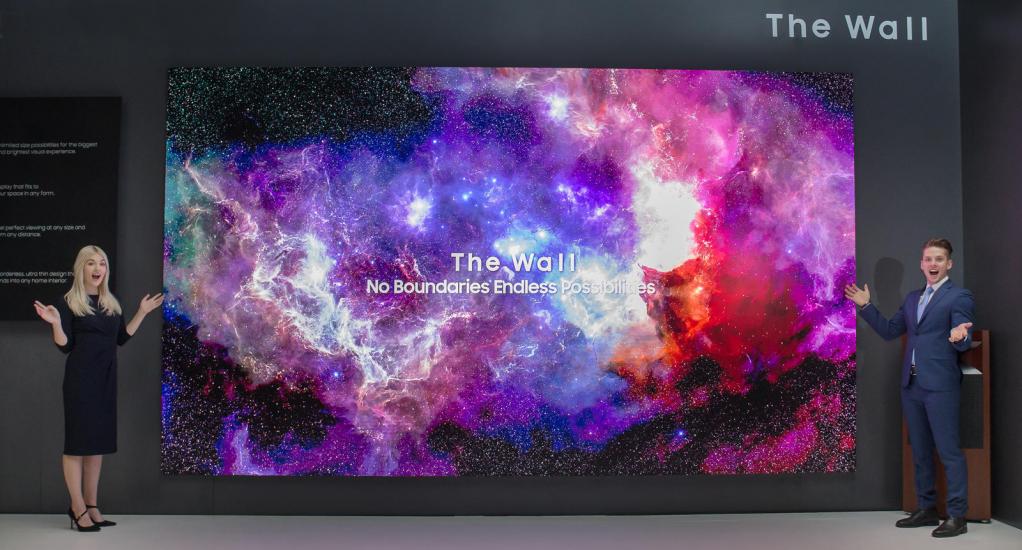 The displays are modular, so in theory can be built to a bespoke size to fit any room. The picture quality and colour brightness is stunning, but as with most new technologies, purchase and install costs are reasonably high at the moment.

Technically speaking, a laser TV isn’t really a TV at all, it’s an ultra-short-throw projector that can project huge images while sat just a few inches from the wall.

Early adopter Hisense is setting their offering apart from the competition by pairing the projector up with a specialised screen to reduce the effect of ambient light and allow for comfortable daytime viewing. Their 100" Laser TV is also 4K, HDR and Wi-Fi-enabled, and features smart functions such as Netflix access and Alexa voice control. Take a look at this video to learn more:

An 80” model is coming later this year, so if you're looking to buy, it might be worth holding out - inch for inch, you’re likely to get more bang for your buck with one of these.

And last but not least...

Although this isn’t strictly screen technology, the new standard for HDMI will open up numerous possibilities for the future of TV through a range of new capabilities. Top of the list is faster refresh rates, enabling up to 120fps for 4K content and 60fps for 8K, but there’s a whole host of changes in this inconspicuous-looking cable worth noting: 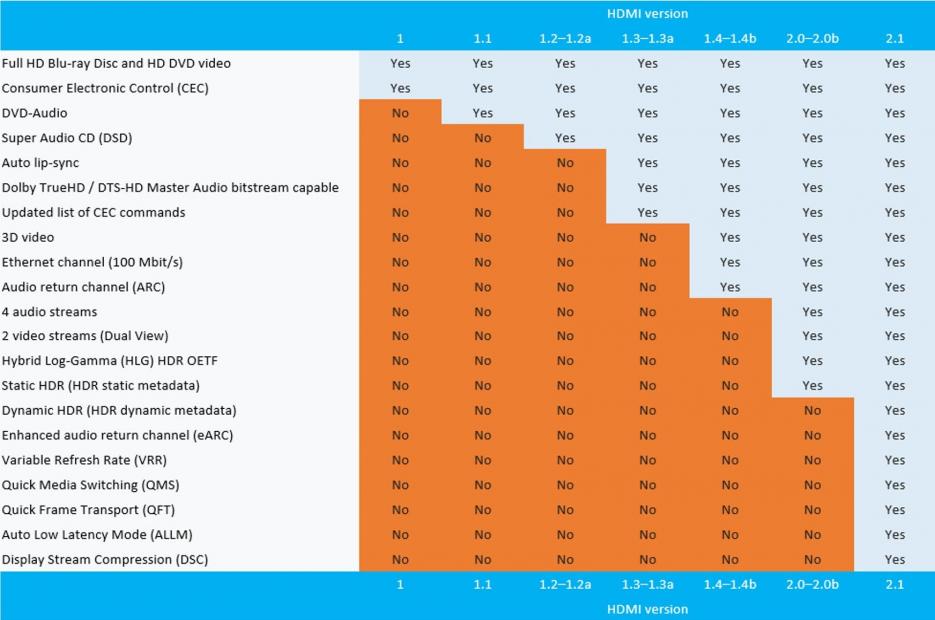 That's about it for this year's guide!

We hope you found this blog useful. If you want a more in-depth look exactly what you can expect from some top consumer brands in 2019, be sure to check out our New Releases for 2019 blog. And don't forget, you can always get in touch with our Consumer TV Specialist Sam Baldry for help with pricing and product choice.