eSports, short for electronic sports, has evolved the hobby of video games into a spectator’s sport. Instead of watching sportsmen compete in a physical game, viewers watch the best of the best electronic gamers compete against each other in a virtual environment.

A Brief History of eSports

eSports has been around for a long time but became popular in the year 2000. This is when computers became cheaper and the internet faster – enabling people to get involved in computer gaming, easily.

This was when gamers began to connect and play against each other online, whereas historically players only had the option to compete with their friends while playing on the same console.

In the past two decades, gaming has evolved from a hobby into eSports which is organised, competitive and professional. Gamers and players have upskilled and, in many cases, gained millions of fans in the process.

eSports is gaining popularity in school and other education environments. Research shows that participation in school clubs and activities can improve students’ performance. eSports as an extracurricular in schools can help students learn important skills, from teamwork and social skills to strategic thinking and planning. Competitive gaming also helps students manage success and failure, time management and travel skills.

While some parents and educators have resisted the idea of organised eSports entering schools, the popularity of this industry is hard to avoid and should be embraced. Between 2018 and 2019 the number of leagues that facilitate eSports in schools nearly doubled.

As esports has become a billion-dollar industry, these skills even expand college and career opportunities. Colleges and universities have not only embraced this industry, offering both graduate and post-graduate degrees, but are also allowing gamers to win scholarships through eSports.

UK universities that offer degrees in this industry include Staffordshire, York and Teeside. The degrees primarily focus on the business and event management side of eSports, from budget management, marketing and casting to important production skills needed to host an eSports event or tournament. Staffordshire University also features a dedicated eSports lab and ‘pro-gamer training facility’, this is where players will level up their skills and train for upcoming tournaments.

eSports tournaments can vary in many ways, from the size and destination of the tournament to what game is played. The largest eSports tournament in the world is Dota 2 International which brings home a prize pool of over $30,000,000. The Fortnight World Cup attempted to take the glory of “biggest eSports event” but fell shy of the winning line. It is predicted these two tournaments will compete to offer the largest prize pool for any eSports competition and we will likely see prizes increase in size as the industry does the same.

Millions of viewers tune in to watch these events, with thousands turning up to public matches to watch their favourite gamers compete live. The most popular eSports tournament of 2019 was the League of Legends World Championship, which racked up 137 million hours of watch-time and over 1 million viewers. 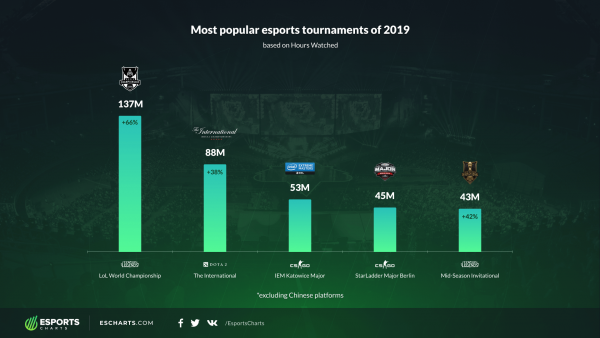 As these tournaments have increased in popularity, there has been a demand for them to be held in arenas, also known as LAN Centres and Gaming Centres, around the world. These centres have opened a new market for Pro AV equipment.

There is an increasing number of reasons why AV installers should be considering the eSports market, especially as the technology in these arenas is not new and is implemented into other environments, such as control rooms. Both environments require image uniformity as well as displays that can show live content at the highest definition.

eSports would not be possible without Pro AV with large venues staging tournaments and creating endless opportunities for both the broadcast and the Pro AV industry.

A five-on-five tournament will have a minimum of 20 video sources, one from a point of view camera on each gamer and a live feed from their console. Professional tournaments typically also include video coverage of the fans, the commentators, gamers in the green room and further on-stage footage.

With so many sources required on screen at one time, these events are both complex and delicate, they require the most reliable technology, guaranteed not to fail. From LED signage and 4K monitors to switchers and pro broadcast, eSport tournaments are a pool of high investment AV opportunities.

Reseller and integrators with a Midwich trade account can find out more about the technology we offer that is ideal for eSports, by contacting their account manager or requesting a call back.