Last week, one of the world’s biggest education shows took place at ExCeL London. The way we teach and learn is rapidly changing, and we went along to the BETT Show to identify all the newest technologies set to shape the future of the next generation of students.

To quote a term suggested by Anthony Salcito, Microsoft’s VP of Worldwide Education, during the ‘Future of Digital Learning’ seminar at BETT this year, the class of 2030 are a generation of ‘’ students; their experience of the physical and digital worlds is so deeply intertwined that their learning is optimised when the two are used in tandem. At a time when most students are becoming more adept at technology than their teachers, how can educational institutions harness these technological advances, using them to aid their students’ learning in a way that both engages them and prepares them for an increasingly digital future? 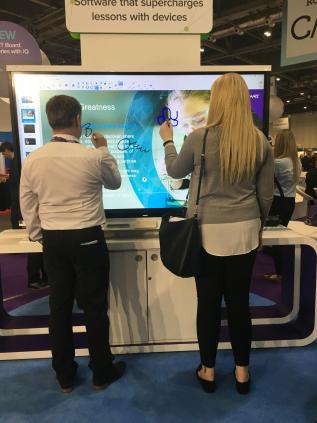 One of the most widespread technologies we found at BETT was the interactive screen, a piece of technology that’s currently dominating not only the education market but also the corporate and hospitality worlds. SMART, one of our leading brands and manufacturer of the first mainstream interactive whiteboard in 1991, took the opportunity to showcase their SMART Board 7000 series at the event. At a basic level, the advantages over traditional whiteboards are obvious. Teachers can easily write and erase, open and add live comments to documents, and engage their students in a highly interactive and collaborative environment. But in reality, an interactive screen can offer so much more. With multitouch now coming as standard in most models, interactive whiteboards are becoming less of a technology treat to an integral part of any classroom. An entire cohort of students can come together to brainstorm and create, shifting the role of the teacher to less of a lecturer and more of a guide to aid their pupils in taking an active role in their own learning.

In the case of SMART, this is taken a step further by the introduction of the SMART Learning Suite, which comes pre-installed in the 7000 series. I had the pleasure at BETT of watching a demonstration presented by two young students; a racing game created in SMART Lab (one of four main features of the Learning Suite) which allowed them to actively learn through a multiple-choice quiz set by the teacher.

As expected, the students seemed at ease with the technology. But what advantages do interactive whiteboards have for teachers, who may be more resistant to invest in such pricey classroom tools?

The possibilities here really are endless. Not only is it easier than ever to plan and develop lessons using a single platform, but in just one touch the lesson focus can move from a presentation to student interaction, onto a fun game to recap the material covered, and then following the lesson, saved files of any notes and performance scores that the teacher can access and collate. For those in larger schools or multi-academy trusts, can be standardised across the board through presentations and lesson plans that are easily shared teachers. Even in cases where a substitute teacher is required, they can pick up straight where the absent teacher left off by reviewing previously recorded lessons. In cases where students have their own devices to use at their desks, SMART Boards can seamlessly link up to create a collaborative network, with teachers able to easily view individual test marks and understand how best to benefit each member of the class.

The students of the ‘class of 2030’ have an incredibly high potential. With the correct tools, teachers can ‘inspire greatness’, but it’s also important to look after our educators. As mentioned in SMART’s BETT Show seminar on multi-academy trusts, an increase in classroom size and pupil intake is putting a strain on our workforce, but it’s technologies like interactive whiteboards that can really help. From reducing doubled-up lesson planning to time spent marking, and even to allowing older students to run lessons and presentations for each other, the benefits of this ever-developing and expanding technology are difficult to dispute. 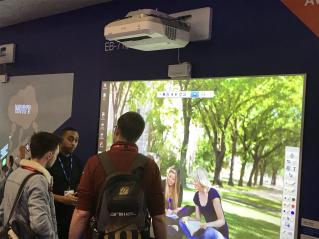 First appearing as a precursor to the now standalone screen-based interactive whiteboard, interactive projectors have recently come into their own as a viable option for future learning. Whereas before, infra-red signals could easily become obstructed by teachers while presenting to a class, the rise in ultra-short-throw (UST) projectors eliminated this issue and enabled high-brightness display at short distances.

For schools with a limited budget, purchasing an interactive projector is an ideal step from traditional teaching towards collaborative learning in the classroom. As well as displaying some of their eco-friendly document solutions range at BETT, Epson also demoed their EB-710ui UST interactive projector. Offering up to 100” of display and the ability to work in split-screen, it’s a perfect choice for teachers who want to get the whole class involved while simultaneously running their own application, presentation or video.

As classroom technology becomes more sophisticated, the possibilities of interactive projection extend much further than just wall-hung projector screens. Using the Magic Carpet from Loxit, educators can beam fun onto any flat surface, whether it be a floor, bed, desk or table. software allows teachers to create or choose from thousands of different activities, especially suited to younger years or to children with special needs have a stimulating multi-sensory learning experience.

With opportunities far beyond what anyone could have imagined even twenty years ago, technology for the education sector does seem a little bit like magic at times (for both teachers and pupils!) Our reseller the Stone Group embraced this theme spectacularly at BETT, achieving one of the busiest and most impressive stalls of the entire show that featured (among other things) a projection technology that could even change the way we read:

Although still in its early stages, this technology paints an exciting picture for the future, from enabling students to showcase their work at open days to hinting at a world where the need for printed books is all but eliminated. QR codes on the corner of each page are read by the projector positioned overhead, changing the viewed information at the turn of a page. Just as if every child’s wizarding world fantasies had come true, books could soon come to life with videos and pages that can hold different information one day to the next.

Just a decade ago, 3D printing was a tool reserved for prototypic use by engineers. Last week, there were too many exhibitors demonstrating 3D printing to count! Unfortunately, I couldn’t quite spot any 3d-printed gold at BETT, but there was certainly enough on offer to get excited about, with models becoming faster and more accessible every year.

During the aforementioned Microsoft seminar on the future of digital learning, Education Marketing General Manager Barbara emphasised that the next generation will be well prepared for the future if they receive personalised learning alongside social and emotional support. As a piece of tech that isn’t necessarily tied to any aspect of a traditional curriculum, the ability for students to 3D print their own personalised creations not only allows them to express their own individuality, but also gives them a creative outlet to discuss with their peers, teachers, and even outside of the classroom with parents or carers. 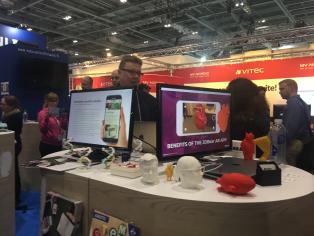 Exhibited at BETT a range of design software, suitable for all ages and abilities. 3DBear (which also functions as an app­) is perfect for younger years, allowing students to creative through 3D dot-to-dot drawings and modular objects that they can personalise before printing.

If required, however, 3D printing can function as so much more than just a toy. 3D Systems have models specifically designed for printing dental prostheses, and the technology has also been utilised in higher education contexts to enable engineering, architectural and design students to make functional creations as part of larger projects.

So far, schools have been reasonably slow to adopt this new technology, due in part to the reasonably expensive cost of hardware and materials but also to a reluctance of teachers to set aside adequate time to learn computer-aided design (CAD) for classroom use. However, much like with interactive whiteboards, the benefits of these new technologies for teachers is often overlooked. For classroom demonstrations, what better way to explore how machinery operates than a working model that students can experience themselves?

Not only does 3D printing offer a great opportunity for children to express their artistic side through personalised, hands-on creation, but also gives them the opportunity to master a technology that will no doubt play a huge part in 21st century manufacturing – after all, the ‘class of 2030’ are the designers and engineers of our future.

Previously a favourite toy of gamers, virtual and augmented realities have quickly begun to infiltrate the classroom with their ability to transport students to a virtual world, or even bring digital objects straight into the classroom. As software becomes more advanced and hardware becomes cheaper, mixed reality has shown itself to be an extremely flexible piece of tech, with the sheer number of different applications showcased at BETT this year painting a very promising picture for its future use. 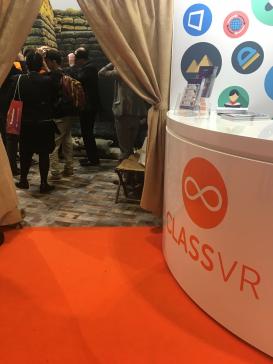 Much like 3D printing, virtual reality has often been viewed as a technological novelty by educational institutions, but brands such as ClassVR are attempting to change this through an image-based headset experience which allows teachers to take their students to different places in the world and throughout history. At BETT, I got a glimpse into what life was really like in the trenches of WWI, one of over 500 resources for teachers to use across subjects such as science, geography, and art.

VR is also heavily intertwined with the rise in 3D printing, taking interaction another step further to bring design and sculpting from the screen to an almost tangible 3D representation allowing users to see and create designs from every angle. , another exhibitor also present at the event, has developed a new computer-based software for 3D design called ShapeLab, optimised for use in a VR or environment, and currently features seven sculpting tools as well as pre-made templates to enable students to reach their full creative potential.

Depending on the means, augmented reality tends to offer a less intense virtual experience, making it well suited to younger audiences. Octagon Studio also at BETT, displaying a range of their 4D+ augmented reality cards which project virtual figures when viewed through a compatible smart device. Children can even colour in their own characters and watch them come to life right before their eyes!

These are a fantastic way to facilitate early years learning both at school at home, but the pinnacle of current AR capabilities is without a doubt Microsoft’s Hololens. Despite being at a premium price point (one which will undoubtedly drop in the coming years as the technology becomes more widespread) the benefits full AR can provide for students at secondary or university level is unparalleled. For example, medical students at Case Western Reserve University in Cleveland have been using the software in their classrooms to better understand the human anatomy:

While the best of these technologies are as of yet an experimental medium and more in the budget range of high-end engineers or research labs, the benefits of mixed reality have already been shown to have a profound effect on students’ information retention rates. A recent study finding that students who had learnt about astrophysics in VR performed significantly better when tested than those taught using traditional methods, to the tune of an average 93% test score compared to only 73% in the latter group.[1] Any educator wishing to allow their students to reach the maximum of their potential will be keeping a close watch on the development of such technologies, as a highly promising way of maintaining a highly engaged, energised classroom of students who are truly taught in their formative years that they can be and do anything their imagination stretches to.

What is Bring Your Own Meeting (BYOM)?