Man of many talents Mark Boardman was honoured this week with a Blue Peter Gold Badge for outstanding achievement in promoting new music artists for a decade.

Mark, who is a media and showbiz journalist as well as the Samsung Print specialist for Midwich, has been recognised by the BBC for "showing dedication and helping others with tremendous success, donating both time and energy into helping young talented musicians. 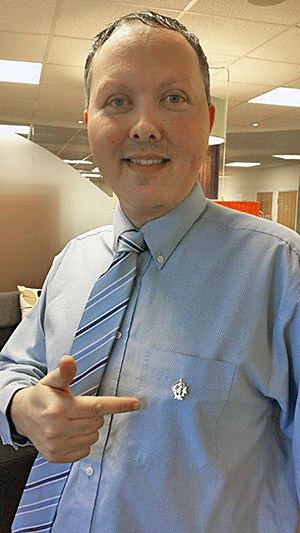 Having worked, interviewed and promoted unsigned acts including Concept, Tich, Sam Smith and Jessie J on his site since before they were famous, Mark has a reputation for spotting new talent very early on. His popular entertainment website MarkMeets.com, which boasts 20+ contributors, has since launched the careers of multiple musicians including The Vamps, Luke Towler, Ellie Goulding, Michael Buble, Overload, Tom Mann, Kingsland and many more and has given Mark the opportunity to work with some of Britains music superstars.

From organising showcases to writing about them in the press, Mark has discovered and promoted some of the biggest talent on the UK music scene.

Typically remaining humble of his latest success, Mark said: I do it because I love making a success where I can see talent. I'm a firm believer in hard work and am so grateful to have been recognised for the success I've had over the years. I believe action is the foundation of success, for me it's about coaching the youth and helping them to invest in their futures and to open doors.

Mark, who runs the brand in his spare time and still performs superbly in his day job, added: "I offer artists a great platform to be seen and heard by the public, media and fellow artists.

Having attended hundreds of music showcases, judged at various talent shows around the UK, Mark has proudly interviewed many acts before they were household names and has even appeared on TV shows including This Morning and The One Show.

A Blue Peter gold badge is a special award given to viewers, fans and individuals who have been recognised by the award-winning BBC childrens television programme of the same name.

of Mark: We think that Mark is worthy because hes done such a fantastic job. He inspires so many people.

Past winners of thi