Optoma gets Edinburgh Fringe star out of a pickle

James Veitch’s return to Edinburgh was averted from disaster as Optoma came to the rescue. 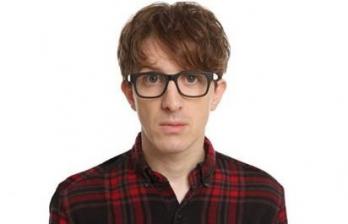 The musician, comedian, director, writer and Edinburgh Fringe star was due to perform his third show, Game Face, at the Fringe, but this unashamedly Powerpoint-fuelled performance was lacking a vital bit of kit – the projector!

Responsible for the fastest ever TED Talk to reach over two million views in the history of TED, James approached Optoma for help. He needed a bright high resolution short throw projector that could be set up close to the screen on stage so that no shadows are cast across the imagery during his performance.

Optoma promptly shipped an EH200ST Full HD projector straight up to Scotland.  This 3,000-lumen short throw model can project a 100” image from just over a metre away from the screen. It has two HDMI inputs making switching between sources literally the push of a button.

Game Face is a geeky comedy about life, love and enabling Bluetooth. It is described as a glorious hour of esoteric, anarchic comedy from the Independent’s ‘One to watch’.

James’ first solo comedy show The Fundamental Interconnectedness of Everyone with an Internet Connection premiered at The Edinburgh Fringe in 2014 to wide acclaim. Described as “Tears-down-the-face funny” by The Sunday Herald and as a show that “manages to be educational while delivering near-constant belly laughs,” by The Scotsman, it was a sell-out success for the duration of its month-long run.

As a writer his work has been published by The New York Times and in various short-fiction journals. He curates the website www.bluffable.com where he publishes comic transcripts of conversations he orchestrates with online email scammers.  He is founder and artistic director of Pale Fire, producing, directing and writing theatre since 2007.

Game Face is on at the Pleasance Dome in Edinburgh every evening in August (except Monday 15) until Monday 29 August.