Major technology distributor and one of Diss’ largest employers Midwich, raised £27,506.23 on behalf on the Big C charity, which provides vital cancer care and support for people across Norfolk and Waveney.

In 2014, Midwich announced Big C as their chosen charity for a two-year period. The company based in Vinces Road, Diss raised funds through a host of fun activities involving their 250+ staff and the local community. Some of these activities included; beat the boss – running challenge, Charity bingo, cycle to work day, quiz nights, car washing, Summer fetes, casual days, bake offs, silent auctions and many more charity focus days.

Dr Chris Bushby, CEO at Big C commented “We are very grateful to the team at Midwich for their creative fundraising efforts over the past two years, which have resulted in an impressive total. The money raised will go directly to help local people receive the best possible cancer care. It is only with this type of kind fundraising support that we are able to continue our work to improve the lives of those affected by cancer.”

Carla Shipp, Group Head of HR at Midwich commented “It’s been an absolute pleasure working with the Big C over the last two years.  We’ve come up with some creative ways to raise donations for such a worthy cause and have made sure we’ve had fun along the way.  We could never have achieved this without the support of Midwich staff and the local community of Diss - a big thanks to everyone for getting involved and donating, in one way or another.

It’s incredible what you can achieve when you work together, we know we’ve played a key part in making a real difference to those people affected by cancer.  The Big C is a fantastic charity and we are pleased to have had the opportunity to support them to provide the best possible cancer care.” 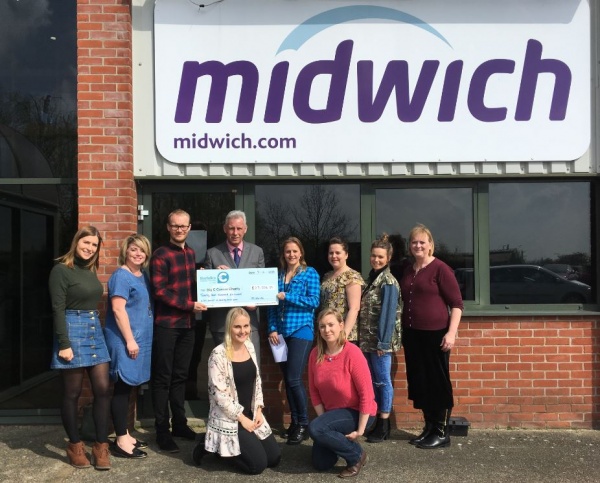 Big C has now raised in the region of £25million since the appeal began in 1980 – their investment in surgical and diagnostic equipment at Norfolk’s hospitals means more people can be treated locally, with faster or less invasive treatments. Their support for world class research taking place across the Norwich Research Park has funded some incredible developments in cancer research and the charity’s four drop in support and information centres across Norfolk and Waveney are used by thousands of people every year affected by cancer.

Midwich have announced Nelson’s Journey as their chosen charity for 2017 and 2018.

Midwich is the multi-award winning trade-only distributor of AV and document solutions with more than 35 years of experience in the AV and IT channels. Distributing solutions in audiovisual, consumer electronics, document management, Midwich is adept at developing sound commercial propositions for its vendor partners and prides itself on being first to market with value added opportunities for its reseller partners.

The Midwich Group is a family of UK and Ireland, European and Australasian distributors with expertise in AV, IT, consumer electronics, accessibility and security. With highly trained sales teams and award-winning aftersales service, The Midwich Group is renowned throughout the industry for its professional distribution of complete solutions from many of the world’s leading electronics manufacturers.

Media enquiries: For more information, please contact Ben Thompson at ben.thompson@midwich.com or on 01379 649200.

In 1980, two young men from Norfolk found themselves with cancer and having to travel to London or Cambridge for treatment, often finding this journey harder than the treatment itself. They vowed the people of Norfolk & Waveney would have access to the best treatment and support in their local areas.

Thirty-five years on and this is being realised more than ever; with over £25million being raised since "The Big C Appeal" began in 1980. Surgical and diagnostic equipment at Norfolk's hospitals means increasing numbers of people can be treated locally and new equipment in hospitals has meant faster or less invasive treatment for a range of cancers. Research across the Norwich Research Park has found some incredible discoveries into cancer and vital support for those affected by cancer is reaching out to those who need it, closer to them, in the local community.

Today Big C funds four drop in support and information centres across Norfolk and Waveney that are used by thousands of people every year affected by cancer. The centres in Gorleston, Great Yarmouth, King’s Lynn and Norwich provide valuable information about diagnosis, treatments, side effects and recovery. Trained nurses and practitioners are also there to provide emotional help, support and complementary therapies.