As the global market leader in digital signage media players, BrightSign helps bring digital signage to life every day. They are known for their reliability, affordability and ease of use.

“BrightSign is the market leader in digital signage. They have industrial-grade signage players that are designed to be on 24/7, 365 days a year and are well known for their reliability and ease of use.”

Digital signage media players can produce an endless stream of content, enabling them to be used anywhere. Whether it is to show images and videos in museums, display weather and live news updates in offices, or social media feeds in shopping centres, BrightSign helps relay information to different target audiences.

BrightSign digital signage media players were chosen for a digital signage roll out at Vue Entertainment. The installation was originally in eleven of the company’s cinemas, including a brand-new site in Darlington, however, the success of the players in these cinemas inspired a wider installation. Vue displays a range of content on their digital signage, mostly delivering in-house promotions on snack, merchandise and memberships.

“Vue is very pleased with the installation and overall solution for all digital sites and is planning a further roll-out. The content deployment and technical services teams manage the network on a day-to-day basis with very few issues,” said Terry Podesta, Director of 360 Digital.

Fred Prego, Marketing & Insight Director at GAME says: “We recognise that digital signage can play a key role as we continue to improve our ability to engage with our customers and offer the best possible experience available. With our fast-changing market leading deals, these signs play an integral part in customers’ education and discovery of both physical and digital content.”

BrightSign digital signage media players powered screens in four of Selfridges windows on London’s Oxford Street. The players helped to transform the shops most prominent window into a photographic studio where eight screens were powered by BrightSign digital signage media players. Selfridges also incorporated a mixture of portrait and landscape screens in two additional windows where BrightSign players were used to show a live Instagram feed.

“BrightAuthor and BrightSign Network make it easy to generate new content for the players, schedule playback and update as required. BrightSign’s players provide a flexible and utterly reliable solution that is low-cost and easy to work with.” said Mike Fabian, manager of Freehand’s Digital Signage division.

BrightSign helped deliver an unusual form of digital signage on a cylindrical column at Westfield, White City, London. One of the main challenges with this cylindrical column was its non-standard format. However, BrightSign players allowed users to ensure their content always fitted the screen correctly - whatever the size - with their fully configurable resolution.

Steve Hudson, Sales Director of Project Audio Visual, said, “Curved signage gives customers a great view of advertisements and on brand content, wherever they are standing. Curved displays give the appearance of a wider screen, catching the attention of potential customers even in a large space, such as a shopping centre.”

Where can I buy a BrightSign Media Player? 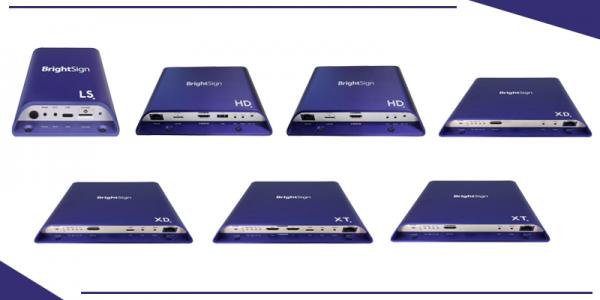 Resellers and integrators with a Midwich trade account can purchase through Midwich.

Don’t worry if you’re not a reseller, get in contact and we can help put you in touch with an approved BrightSign reseller.

Building The Future Of Aviation